Amber is the Owner and Director of Vicious Lacrosse – A goalie training / recruiting team.  She previously coached at Niagara University. She sits on the Niagara Arts and Cultural Board of Directors, was recently the Director of Public Relations and Communications for the Haudenosaunee Nationals Board of Directors since 2013, and is the Chair for the Niagara Falls Human Rights Commission. She was recently appointed to the World Lacrosse Women’s Box Lacrosse Working group by World Lacrosse President Sue Redfern charged with bringing the game of women’s box lacrosse to the international stage, as well as the World Lacrosse Box Lacrosse Rules SubCommittee.

Since 2006, Hill has been the Haudenosaunee Nationals Captain and has competed in four international World Lacrosse World Championships. She has also led the Nationals to a first place finish in the 2019 PanAmerican Lacrosse Association World Championship Qualifiers. Hill has competed at the highest level for women’s box lacrosse in the Ontario Women’s Box Lacrosse League, winning two gold medals, and she helped the Six Nations Snipers in the Women’s Arena Lacrosse League win a gold medal in 2018. She signed a professional contract to play for the Long Island Sound in the United Women’s Lacrosse League in 2018.

This will be Taylor’s sixth year with the camp since its inception; twice as a participant and three times as an instructor.  This year she will be taking on a NEW role as the Director of Girls’ Instruction, taking over for Shannon Novak who has been displaced due to military responsibilities.  Not much to add as i have said it before she is the pride and energy of this camp, she brings a wealth of knowledge, intensity and  a FUN personality.  However this year, I am looking forward to seeing her leadership abilities shine this year.  She takes a ton of pride as an instructor and has a ton of passion that goes long with her personality.  I look forward to her stepping up to the challenge as a Director of Instruction (and Fun) bringing the same amount of energy to camp as she has in the past and making all campers feel welcomed. You will know who she is, immediately when step on campus.

This year we implemented a new program for rising seniors to provide them an opportunity to showcase their leadership abilities as well as their knowledge of the position. The Counselor-in-Training internship program will allow the intern to integrate with the camp staff and provide campers the proper instruction to help them improve their skill and leadership abilities The candidate was selected based on their knowledge and demonstration of the 4 pillars of what it means to be GOALIE STRONG: Discipline, Respect, Character and Resilient.
I’d like you all to meet our inaugural Camp Intern selectee… Ava Oskui. She will be a Sr next year at Grosse Point South HS and plays for Triumph Lacrosse Club in the summer. She has been a camper the last 5 years and has excelled at the position, earning Most Improved camper 2 years ago. She has an infectious laugh and smile that brings the joy out all those around her. Every camp photo shows her smiling with and with out her helmet on. She will bring a ton to camp this year and we look forward to her being on the other side of the fence and giving back to the camp and sport.

This will be Rachel’s Sixth year with the camp since its inception; 3x as a participant and 3x as an instructor.  After last year (2021) she has been re-titled as the head of the youth group known as the “Bubble Guppies”. Basically every camper and instructor were jealous of the fun she had with that group, and we look forward to her repeating those efforts this year. Since she has been an instructor her personality has really come alive and is starting to fit right in with the philosophy of the camp, having fun while learning.  She knows the game extremely well and loves working goalie drills, because no better way to learn than to have fun while doing it.  She will continue to be the instructor of the youth group (aka “Bubble Guppies”).  She has also taken an invested interest in the GOALIE MATTER campaign and I look forward to her points of view during camp this year.  Previously she played her HS ball at Plymouth Christian but spent most of her club years playing for Team Triumph. Side note her father, Mike, is our camp photog and takes all the amazing photos you see up on my homepage and on social media.

This will be Matt’s first year as an instructor. He’s an assistant coach for the Huron Valley United boys’ lacrosse team – unified high school team consisting of Lakeland and Milford High Schools in the Huron Valley School district – as well as a coach on staff with the M53 Lacrosse Club – a club team on the east side of the state, supporting many Troy and Rochester area high schools. Additionally, he has spent the last few summers as a private goalie instructor, working with a handful of middle school to high school goalies in my local area.

He played goalie for Michigan State’s club teams, where he was a starting goalie for all three years that he played, before graduating from MSU in 2019.   He continues to play in summer leagues through Champion Lacrosse out of Birmingham. What impresses me the most about Matt is that he was a self-taught goalie. He spent many hours finding drills, workouts, and exercises that would help build his fundamentals. What makes Matt a valuable instructor is the fact he spent most of his lacrosse career growing up playing everywhere in the field, from attack to goalie, before he truly settled into the best position on the field.
We look forward to having Matt at camp this year.

This will be Maddie’s third year with the camp as an instructor. She is the sunshine at camp with her fun and whimsical personality. She loves working with kids and gets down to their level really well with her instruction.  She knows the game  and loves working with goalies.

She had another career year for the Dutch of Hope College starting 16 of 16 games. She carries a career  43.4% SVP and a 12.42 GAA and earning a MIAA Defensive Player of the Week award again this year.

Coach Jordan is originally from Pennsylvania but now is the Assistant Coach at the University of Alabama-Huntsville.  Warren has been coaching lacrosse for over 10 years. Growing up in southern Pennsylvania, Warren played lacrosse through high school. Upon graduation from high school Warren decided to forgo his college offers, choosing to enlist in the United States Marine Corps from 2008-2013. During his five-year enlistment Warren played for the Marine Corps lacrosse team and had the opportunity to play against Ryukyu University of Okinawa, Japan, in the Summer of 2010. Warren spent three years overseas serving two tours to Afghanistan. Due to an injury on his second deployment to Afghanistan, Warren coached the Marine Corps lacrosse team in Camp Pendleton California during the 2013 season.

After earning his honorable discharge in 2013 from the Marine Corps, Warren enrolled and played lacrosse at Houghton College in western New York. Warren moved to Huntsville in 2016.

In addition to coaching at UAH, Warren has been instrumental with the growth of youth lacrosse in the Huntsville area. 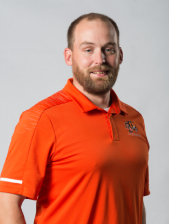 A Philadelphia native who first picked up a stick at the age of 8, Lauren was a four year varsity starter before playing at the collegiate level as a Division 1 goalie for Temple University. During her career as a Temple Owl she won an A-10 Championship and made the NCAA playoffs. After college she moved to Northern Virginia and served as a career firefighter with the Fairfax County Fire Department for 10 years.

Lauren’s passion for lacrosse never waivered, bringing her back to the field in 2011 as the Assistant Coach and Goalie Coach for Centreville High School. Over her nine year career with Centerville, she helped lead the Lady Wildcats to appearances in two State Semifinals and a State Championship.  In 2019 she graduated her first All-American goalie who currently plays at Duke University. Today she serves as the Goalie Coach for Oakton High School.

In addition to coaching high school teams, Lauren evaluates goalies for the Under Armor All-American Team, is the goalie coach for the Virginia Metro Lacrosse Club, and supports and trains goalies and coaches for several local recreation programs.

Lauren’s children are often seen playing lacrosse on the sidelines at practice, continuing in the family tradition. Off the field, Lauren spends her time snowboarding, watching her beloved Philadelphia Eagles beat her husband’s New York Giants, and baking original cupcake designs for family and friends.

Blake is a first year instructor for the camp. He comes to us for Lourdes University and prior to that he played his HS ball at Jenison HS (Jenison, MI). He brings a wealth of knowledge to the sport as he is a “True” student of the game and the craft of the goalie position. Over the last 3 years as a student of the 6×6 Goalie Academy, he has excelled in all areas that make up the components of GOALIE STRONG: Discipline, Respect, Character, and Resilient. Through his demonstration of these 4 pillars, even though he was never a camper himself, he has become the namesake of the highly regarded and coveted Camp MVP Award (Goalie Strong). His work ethic has surpassed any work ethic I have ever seen either as an instructor or coach. He is relentless in his ability to always find new ways to improve his craft.

Blake saw some playing time this year at Lourdes as he was 1 of 4 goalies fighting for playing time. While attending Lourdes and attending classes, he also manages to participate in the local ROTC program through the University of Toledo. He has aspirations to enlist into the military in the future.

We look forward to his presence at camp, to see him instill some of his attributes that make him a great leader into our campers. If anyone knows how to lead, this kid does, and does it in a way that could make anyone a True Leader.

Tate will be a 1st year instructor at camp, but has been a 3x camp participant. Tate is a First Class goalie and person all the way around. He has an uplifting and positive personality and gets along well with everyone. Two years ago he earned the Camp MVP award for his ability to demonstrate the 4 pillars of being GOALIE STRONG: Discipline, Respect, Character, and Resilient. He has a wealth of knowledge and a strong work ethic, which is a result of being tutored by previous camp instructor and former teammate, Jack Erickson (Midland ’21). He is a very open and understanding individual, and because of that we look forward to his ability to handle the tough conversations we will be having on GOALIES MATTER night. A good instructor/teacher does not require you to be an All American or attend a Division 1 school. If you can relate to kids, understand that every goalie is different, and teach using a variety of methods and techniques, then you have the perfect formula to teach to anyone, and Tate possess this skill.